Ion exchange resins age in a number of ways, and understanding this is key to both prolonging resin life and minimising regeneration costs.

In this article we will discuss a number of the key ways that ion exchange resins can fail.

Ion exchange resins are mostly made from functionalized polymers (most commonly polystyrene) cross-linked with divinyl benzene (DVB) to hold the resin in a dense particle form. These cross-links are suceptable to degradation as a resin is exposed to oxidation agents like hypochlorite, chloramines and as these cross-links start to brake down, the resin starts to swell and soften. As the resins swell, the reactive sites also become more spaced out and selectivity of the resin drops, giving rise to higher hardness leakages and lower capacity. This resin swelling often masks the loss of resin from the vessel.

Transition metals such as copper and iron will catalyse the oxidation process, causing resin to fail much earlier than might be predicted. These metals are picked up by the resin and often will precipitate within the beads if regeneration water is high in dissolved oxygen or is high in pH.

This will occur in all resins, however its primarily a problem with SAC resins as they are more often the first resin in a train and thus exposed to chlorinated water. The primary degradation pathway for SBA and WBA resins is the degradation of their functional groups. The acid functionalities in the SAC and WAC resins are actually quite stable and rarely degrade in themselves.

The level of cross-linking is a complex topic.

The level of cross-linking can be directly corelated to the total exchange capacity of the resin in the swollen form. Thus, as the resin degrades and loses its cross-linking, its moisture content and swelling increases. This also reduces the total exchange capacity by essentially diluting the number of functional sites by swelling them away from each other. Thus, for systems with high amounts of oxidants or high mechanical stresses, a more highly crosslinked resin is chosen. And in non-chlorinated systems, low crosslinked resin can be used to give faster kinetics. For normal water 8% DVB level is typical and for low chlorination systems 6% or lower DVB content can be used. For water with higher chlorination levels, then 10% or even up to 12% or 15% can be used. Macro porous resins with over 15% maybe necessary to offer the best protection from oxidation. 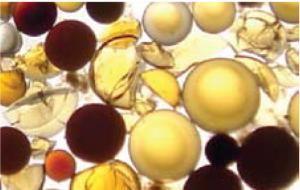 The functional groups on acid resins (SAC – sulphonic acid and WAC – carboxylic acid) are very stable and generally are not degraded in a resin. However, the basic resins will lose capacity due to degradation of the reactive sites and is especially true for the SBA resins that contain a quaternary amine functionality. These functionalities are sometimes completely destroyed (often with Type I SBA resins) and sometimes partially degraded to a tertiary amine functionality. This essentially converts a strong base site into a weak base site. If this is the case then this may not result in a loss of total exchange capacity but will impact the salt-splitting capacity and the ability to remove species like silica and boron.

The third failure mode is fouling of the resin. This can be caused by precipitation of inorganic scales like calcium carbonate, calcium sulphate, aluminium oxides, barium hydroxides or organics such as tannins, Natural Organic Matters (NOMs) or man-made oils. Contaminants are not generally removed during regeneration without special effort and will block ion-exchange sites. For SAC resins, the common foulants are iron, barium or aluminium. SBA resins can become scaled when incompletely regenerated in waters containing high sulphates or carbonates. They can also be silica-fouled when not properly regenerated with warm caustic. SBA resins are good organic scavengers and can become organically fouled with natural organics such as tannins. 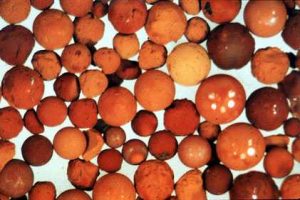 A fourth method of degradation is osmotic shock. When resins regenerate, they shrink and swell. With repeated shrinkage and expansion, some beads will break and get washed out.

Mechanical breakage may also occur if the resins are subjected to mechanical shear with repeated transfers from one vessel to another or too high flow pressures and flow rates. A typical new resin will generally have about 90-percent whole beads, but as the resin ages small bead fragments (fines) are generated, and in a well operating system are washed out during backwash. If this is not occurring then this will appear as a high pressure drop across the bed.

How long do resins last?

It’s hard to predict how long a resin will last as it’s highly dependent on both the feed water and how the plant is operated. For example, it’s possible for a single oxidation event to destroy a resin in a matter of weeks or months. However, there are some rules of thumb and Membrane Works can work with you to determine how much life may be left. Ultimately, when the resin no longer produces water in the volume and quality that you require then it needs replacement. The decision to replace a resin may be based on inadequate flow rates, loss of water production capacity due to increased regeneration requirements, increased ion leakage, or the economic costs of increased regeneration.

For a well-run system the following resin life can be expected:

Membrane Works have developed a tool to approximate the remaining resin life based on the loss of cross-linking in the system as well as the loss of functionality in SBA systems. This is a valuable tool to help sites make decisions on when to look at replacing a resin bed and when to continue to operate. This tool will let you know where your resin sits compared to what would be expected in a normal operation. A decision can then be made to either replace the resin, conduct an enhanced resin clean, or continue operating as is.

Contact Membrane Works today to find out more about how a resin analysis and life assessment can help you. 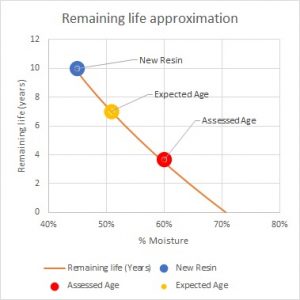 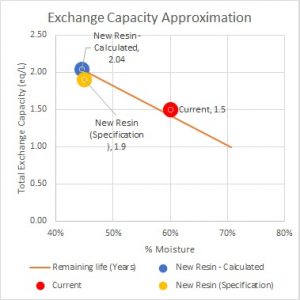 Contact Membrane Works today to find out more about how a resin analysis and life assessment can help you. 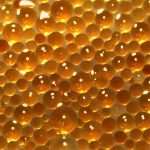 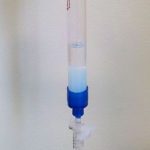 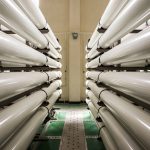